The Iron Wyrm Affair by Lilith Saintcrow - My Thoughts 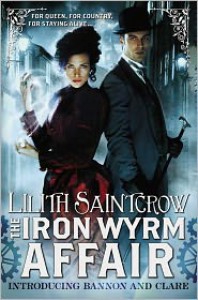 This book wasn't at all what I was expecting, but I really enjoyed it a whole lot.  :)

The first book in The Bannon and Clare Affairs series introduces us to quite the colourful cast of characters.  Emma Bannon, the Prime sorceress.  Archibald Clare, the mentath with almost supernatural powers of logic and deduction.  Mikal, Emma's shield or bodyguard, for want of a better word.  And a whole bunch of other fascinating folk.

I thought I was going to read a romance with steampunk and mystery/thriller elements but what I ended up reading was a steampunk adventure/fantasy with a wee bit of romantic overtones that had more to do with the magic going on than any romance plot.  And that was FINE!

The world-building that went into the creation of this AU Victorian age Britain is nothing short of intense, in-depth and fascinating.  There's magic - White, Grey and Black and it's tied in with the tide. Then there are the mentaths who can't deal with magic at all; it fries their logic synapses, so to speak.  So when Emma and Clare team up, well, it's quite the miracle.  :)

And then there's the mysterious Mikal.  How he comes to be Emma's Shield is a story in itself, one that we don't get many details of.  I assume, I hope, this will come in later books, probably in bits and pieces for now.  I think he must be a vampire or something. He intrigues me.  I think he's probably, right now, the most intriguing character of the whole bunch of intriguing folks.

The plot is simple.  Someone or something is attacking the realm, basically, and needs to be stopped.  How Emma, Clare and their bunch go about it is action-packed and filled with twists and turns.  You know... it reminded me a little - probably because of the setting - of Penny Dreadful and I could definitely see Eva Green portraying Emma.

Anyway, I really enjoyed it and am glad that I have the second one waiting in my ereader.

(Note:  I paused in the reading of this to read Crash & Burn - and it was hard to pause.)