The Cruellest Month by Louise Penny - My Thoughts 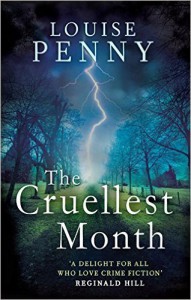 Chief Inspector Armand Gamache has firmly established himself as one of my very most favourite book detectives up there with Benjamin January (Barbara Hambly) and Trixie Belden (Julie Campbell/Katheryn Kenny).  I love him, it's as simple as that.

The Cruellest Month is the 3rd of the Inspector Gamache books and not only does it have a fascinating mystery at the centre of it, it also brings to a close what I'm assuming is the first of the Gamache series arcs. (The 12th book is due out this August after all).  And it solves both of these things in a very Louise Penny type of way - meaning that it left me very thoughtful about people and what motivates them.

Back to Three Pines we go, of course, and in and around the murder to be solved, we begin to see what exactly makes it special.  A place out of time?  Sorta.  :)

We meet all our old Three Pines friends again, Clara and Peter, Gabri and Olivier, Ruth, Myrna.  And we get our team assembled once again too.  The stalwart Inspector Beauvoir, Agent Lacoste, Agent Nichol and Officer Lemieux have joined Gamache to solve the mystery of the woman apparently frightened to death in the middle of an Easter Sunday seance.

The growth of all these characters - and the AHA! moments near the end OMG!! - is what elevates this series above the normal police procedural novels.  And the way Gamache's mind works sometimes is just amazing!

I love them and I am seriously debating my rule about not immediately jumping to the next book!