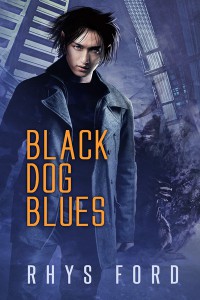 Ah, Rhys Ford has steadily become one of my go-to authors.  She never disappoints and often even totally delights.  Like this time.  :)

Black Dog Blues is the first of the Kai Gracen series - a post-apocalyptic urban fantasy type series.  What's happened, you see, is that the lands of the Sidhe, the elvin (as Rhys calls them) have merged with the lands of mankind.  This premise hits a lot of my sweet spots, I have to say.

Whereas Rhys usually writes a lot of steamy sexytimes and intense romance, this series is different.  It's really fantasy, pure and simple, with elves and magic and dark creatures and adventure and while there is a romantic element and Kai is definitely a sexy, sexy creature... it's just a small part of the story so far.  This is, after all, Book One.  Quite honestly, the few steamyish elements almost felt... out of place, maybe?  I did like how the relationship between Kai and Ryder ( the elvin lord) grew and made it from a bad place to a good one.  And their banter... Rhys is really good with banter and I love that!

I really enjoyed the world building that went into this ,even though there were times I felt something must be missing, but I think we'll find out more and more as time goes on.

So I really loved this in the end.  One of my faves stepping a bit outside of her norm and making it work.  And you know... there wasn't a jarring or manipulative cliffhanger - so I gave it an extra half star because Rhys... .well, she loves those damned cliffhangers that I hate.  *LOL*

I'm glad I have book 2 (which just came out) already in my Kobo!