Witchmark by C.L. Polk - My Thoughts 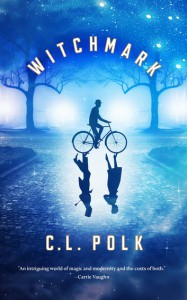 I'm going to be frank.  A big reason I bought this book is because the online advertisements for it that featured the cover were so darned clever! If you haven't seen them, the two figures reflected from the bicycle wheels actually walked!  I tried to find a link, but was unsuccessful.  Anyway, that's one of the reasons.  Other reasons include recs by authors I like and an intriguing book blurb.

So, as Deborah Ross stated in her review on Goodreads, "The setting, very much like England in the throes of national PTSD following the First World War, a magic-yielding aristocracy, a conflicted hero and so forth, are familiar enough to be recognisable, yet integrated into a freshly imagine world."  I think that explains it perfectly.  :)

Just about everything works. There were a few places that I thought could use a bit more editing to make things a bit clearer, and maybe a tweak or two for the pacing, but they're mostly quibbles. The character of Miles is terrific and sympathetic and you can' help but like him. The secondary players - it's written in the 1st person POV so everyone else is a secondary for me - are interesting and possess more than one dimension.  The mysteries of the plot are intriguing and kept me guessing in many cases, and when they didn't, when I guessed what was happening, I kind of felt that maybe I was supposed to.

My one caveat is the whole romance angle.  The book is marketed as a fantasy romance, but it seems to me to be more a fantasy novel, set in an AU of WWI England with an important romantic subplot.  The romance is really far from the main element of this story.  So much so that the light-heartedness that permeated the last pages seemed almost out of place for the rest of the novel.  So beware, if you're looking for a romance-heavy story, I don't think this is it.

That being said, I cannot WAIT for the next book to come out.  It's coming out in February of 2020 according to both Kobo and Amazon.  On Goodreads, the author has responded to the question by saying summer of 2019.  God only knows.  And not only that, the images for Book Two have as its title Greystar while the text shows it as Stormsong.  Again, your guess is a good as mine.  All I know is that I will be there to read it. :)