The Poppy War by R.F. Kuang - My Thoughts 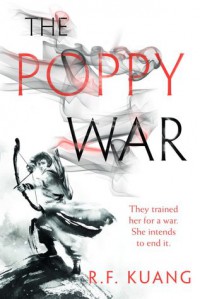 Well.  This book was touted as one of the best of 2018 and it is nominated for a 2018 Nebula award for best novel.  I didn't like it as much as the majority of people seem to have.  I have read 5 of the 6 nominees and this was my least favourite of them. (Spinning Silver is the one I've not read.)

First off, let me say that the book is well-written read for all that.

My problem lies with expecting to see something new and different, but all I really saw were the same fantasy tropes that have been around forever.  The orphan child with the mysterious background.  The Chosen One.  Hidden magical powers. Gods run amok.  I think the only thing that was was even remotely new was that the book is set in an alternate historical China, or that's what I felt it was.  I was disappointed, and even though, like I said, the writing was good, I found that disappointment colouring my read.

My other problem was with the protagonist, Rin, the orphaned peasant girl with the dark skin. This is her story, but I felt that things were just happening to her.  I don't know that I felt her grow from her somewhat naive 16 years of age at the beginning of the book to her beaten, tortured, suffering (according to her words near the end of the book), 19 year old self.  I was told that she did, but I never FELT it.  At one point, she's yelling at one of her close friends, crying out that she's suffered fro so long, been beaten and tortured and betrayed and near killed etc... so she deserved getting her revenge, and I thought... but were you really?  I was told she did, but....  I dunno, she never really came alive for me.

And you know, this book is rather grim-darkish.  It's not promoted as such, but I think it really is. In the last third of the book, things get very violent and dark and at times just downright horrific.

So, anyway, I really didn't get what all the big excitement was about.  Will I read the second book that's due out this summer?  Probably, but I'm not in any rush